HTML5 almost ruined Facebook when baking in the mobile web standard to speed up development slowed down the performance of the social network’s main iOS and Android apps. For a brief moment in 2011, Facebook even tried to build an HTML5 gaming platform codenamed Sparta to escape the taxes of Apple and Google’s mobile operating systems. But at the time, HTML5 wasn’t powerful enough for great gaming. Facebook eventually ditched HTML5, rebuilt the apps natively, and Facebook became one of the most powerful players in mobile.

Now Facebook is giving HTML5 another shot as a way to expand its Instant Games like Pac-Man and Words With Friends to the developing world through Facebook Lite, and to interest communities via Facebook Groups. With improvements to smartphone processing power and the underlying mobile browser app technology, HTML5 can now support snappy, graphically-complex games like Everwing seen below. 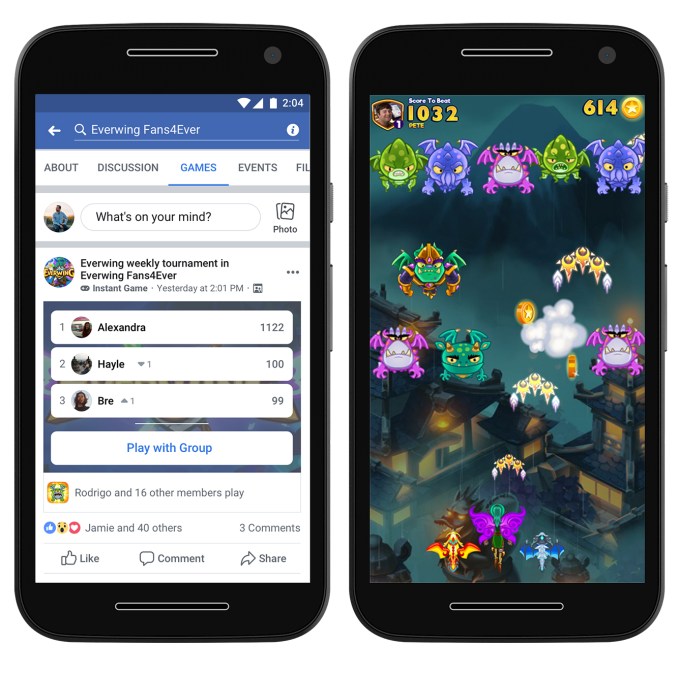 Instead of having to download separate apps for each game from the Apple App Store or Google Play, Instant Games launch in a mobile browser. That keeps Facebook Lite’s file size small to the benefit of international users with slow connections or limited data plans. And it lets Instant Games integrate directly into Groups so you can challenge not only friends but like-minded members to compete for high scores.

90 million people each month actively participate in 270,000 Facebook Groups about gaming, and now they’ll see Instant Games in the Groups navigation bar next to the About and Discussion tabs. Facebook is also considering making games an opt-in feature for non-gaming Groups. In Facebook Lite, Instant Games will appear in the More sidebar so they’re not too interruptive.

The expansion demonstrates how serious Facebook is about becoming a gaming company again. Back in its desktop days, the games platform dominated by developers like Zynga racked up tons of usage, virality, and in-game payments revenue for Facebook. That revenue declined for years after mobile usage began to dominate in 2014, but recently stabilized at around $190 million per quarter. Apparently someone is still playing FarmVille. 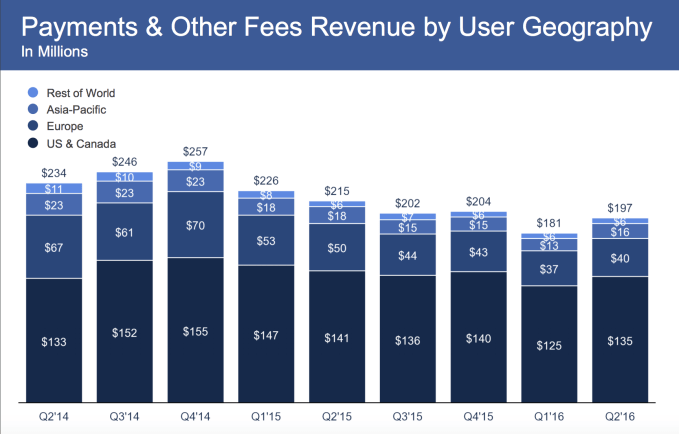 Facebook launched Instant Games in late-2016 to give people something to do while they’re waiting from friends to reply to their messages. Around the same time, Facebook launched Gameroom — a Steam-like desktop software hub for mid-core gamers, though there’s been less news on that product since. Instant Games rolled out worldwide in mid-2017, and opened to all developers in March of this year. It’s since been expanding monetization options for developers to make building Instant Games a sustainable business. That includes making Instant Games compatible with Facebook’s playable ads that let developers lure in users from the News Feed.

Facebook won’t actually be earning money from in-app purchases on Instant Games on iOS where it doesn’t allow IAP due to Apple’s policies, or on Android since it began forgoing its cut last month. It does take 30 percent on desktop though. But the bigger monetization play is in ads where Facebook is a juggernaut.

With Instant Games on Messenger, Facebook’s desktop site and main mobile app via bookmarks, its new Fb.gg standalone gaming community app, and now Facebook Lite and Groups, the company is prioritizing the space again. That seems wise as gaming becomes more mainstream thanks to players livestreaming their commentary and phenomena like Fortnite. And with Facebook’s expansion into hardware with the Portal smart screen and a forthcoming TV set-top box, it will have more places than ever for people to play or watch others duke it out.

Passport, a customer service company focused on shipping, has raised $3 million in seed funding from some notable names

Sick of managing your Airbnb? Vacasa raises $64M to do it for you