Google Shopping is getting a redesign with several new features, including options to shop local stores, track prices and even find style inspiration through Google Lens. Already, Google Lens’ smart image recognition technology can help identify objects, translate text and find similar items. Now, using a photo of an outfit you like — for instance, something you found on Instagram — Google Lens will be able to pull up other “style ideas” from around the web.

These style ideas are focused on showing you how other people are wearing the item in question, not just returning matches of similar items, Google explains.

For example, if you found a skirt on social media, you could take a screenshot then use Lens in Google Photos to see how other people have been photographed wearing that same skirt.

But Lens isn’t limited to photos of new clothes posted online. You also can photograph an item hanging in your own closet, or seen on a store rack, and get suggestions of people wearing similar pieces.

It’s also clearly meant as a challenger to Pinterest, which has been heavily investing in its own image recognition technology. This has allowed it to capture consumers’ interest long before their placing items in their online shopping cart — an existential threat to Google’s business, potentially.

Pinterest users often browse the site for inspiration, whether that’s what to wear or how to wear it, or how to decorate their home, or even where to travel. Later, those interests and desires may translate to clicks and purchases. The challenge for Pinterest is being able to connect the inspirational browsing with the checkout process.

Pinterest’s latest efforts on that front is the launch of its own “shop” tab, designed to showcase products.

Google, meanwhile, is doubling down on Google Shopping.

Its big redesign has now rolled out in the U.S. on both web and mobile, following the merger with Google Express earlier this year, and last month’s final shutdown of the Google Express brand and destination.

The new version of Google Shopping aims to make itself a one-stop shop for everything that’s around the web… and not on Amazon.

The updated Google Shopping experience includes a personalized homepage based on your habits and purchases, a price tracker for getting notifications of changes and drops and the ability to shop from both online and local retailers. (Buying locally means you’ll have the option to go pick it up — great for last-minute gifts.)

Google says you can now shop from thousands of stores through Google Shopping and check out using the information saved to your Google account. It also offers a “Google guarantee,” on the items you purchase, which includes customer support and help with things like returns and exchanges.

Google is pitching the new experience as a redesign. And to some extent, it is, thanks to new features like price tracking and universal shopping carts. However, at the root of it, you’ll find it’s still very much the same concept that once was Google Express. That is: it’s an online Google-branded destination where shopping is meant to be as convenient as on Amazon. 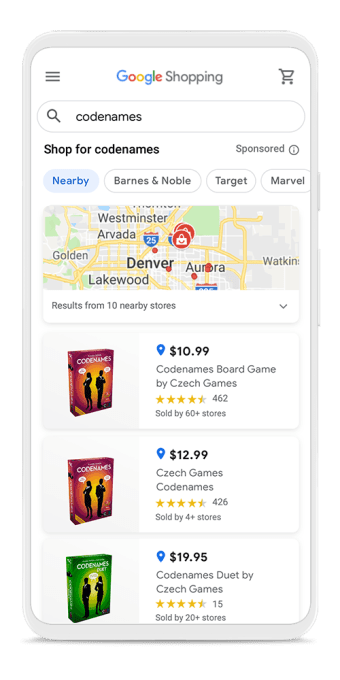 But Google Express failed to capture consumers’ attention the first time around because of what Google lacks: a Prime competitor. There is no subscription that promises fast, two-day (or less) shipping on millions of items, nor the wider perks program that Amazon Prime offers.

That said, it’s smart for Google to capitalize on the shopping search traffic it does have, and make that experience feel more connected and seamless. After all, Amazon doesn’t have everything — especially when it comes to specific fashion brands. That will see users turn to Google to search instead.

Google says the new Google Shopping is live in the U.S. on web and mobile today.

Google Lens’s new feature is also live in the U.S. only for now.

Natalist founder Halle Tecco wants to get you pregnant