Julio Vasconcellos is the managing partner of Atlantico, a venture capital fund focused on Latin America. He was previously the founder of Canary and Peixe Urbano, and was Facebook’s first employee in Brazil.
More posts by this contributor

Over the past year, Latin America has been covered heavily in the international news as the COVID-19 pandemic led many to question our endurance in the face of a crisis. But the region’s mega-fundraising rounds and shiny new unicorns have countered with optimism around its budding tech ecosystem.

When we first shared LatAm’s digital acceleration story in last year’s Latin America Digital Transformation Report, we believed we were at the peak of digital growth catalyzed by the pandemic. E-commerce penetration was at an all-time high and the market cap of public technology companies was growing much faster than the region’s GDP. But with 2021 came all the second- and third-order effects of the crisis, further accelerating a continentwide tech expansion to a pace beyond any projections.

In this year’s report, we dedicate 200 slides of data-rich analysis, primary research, private company data and case studies to tell the story of this “second wave” of change we are witnessing. Ranging from the rapid adoption of sustainable technologies to the welcoming of a new local creator economy, we detail the surprising changes the pandemic has brought to consumer preferences, workplace dynamics, business models and the geopolitical influence on the fast-changing tech sector.

An initial top-down view paints a clear picture of a region at an inflection point. The Atlantico Digital Transformation Index, which measures tech penetration by tracking the value of public technology companies as a percentage of GDP, rose to 3.4% in 2021 from 2.3% in 2020 for LatAm as of August. 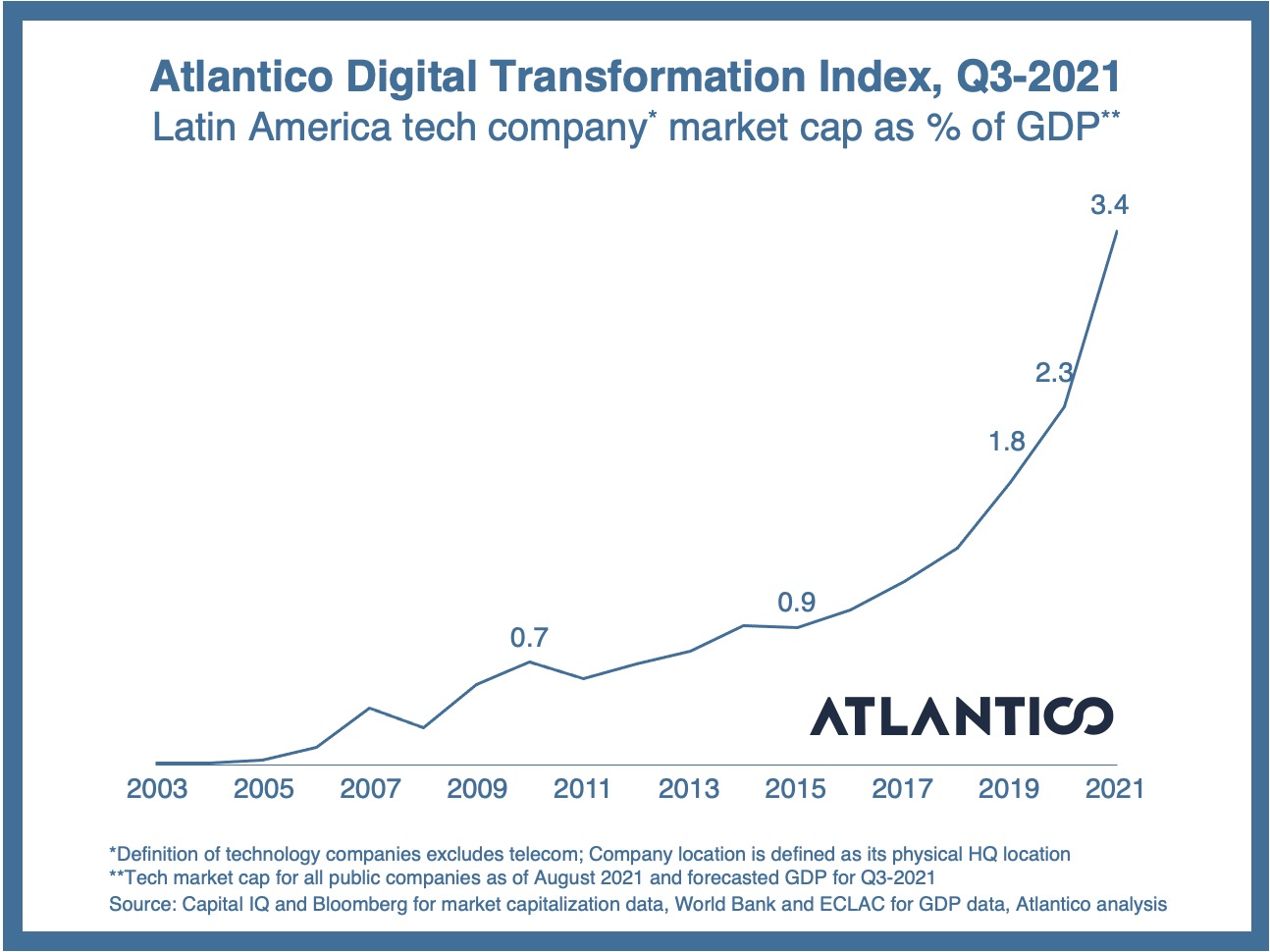 Similarly, based on an internal analysis of private company data, we estimate that the value of regional unicorns reached $105 billion, more than double last year’s figure of $46 billion. Eight new unicorns have already been minted this year, nearly reaching 2020’s rate by midyear. 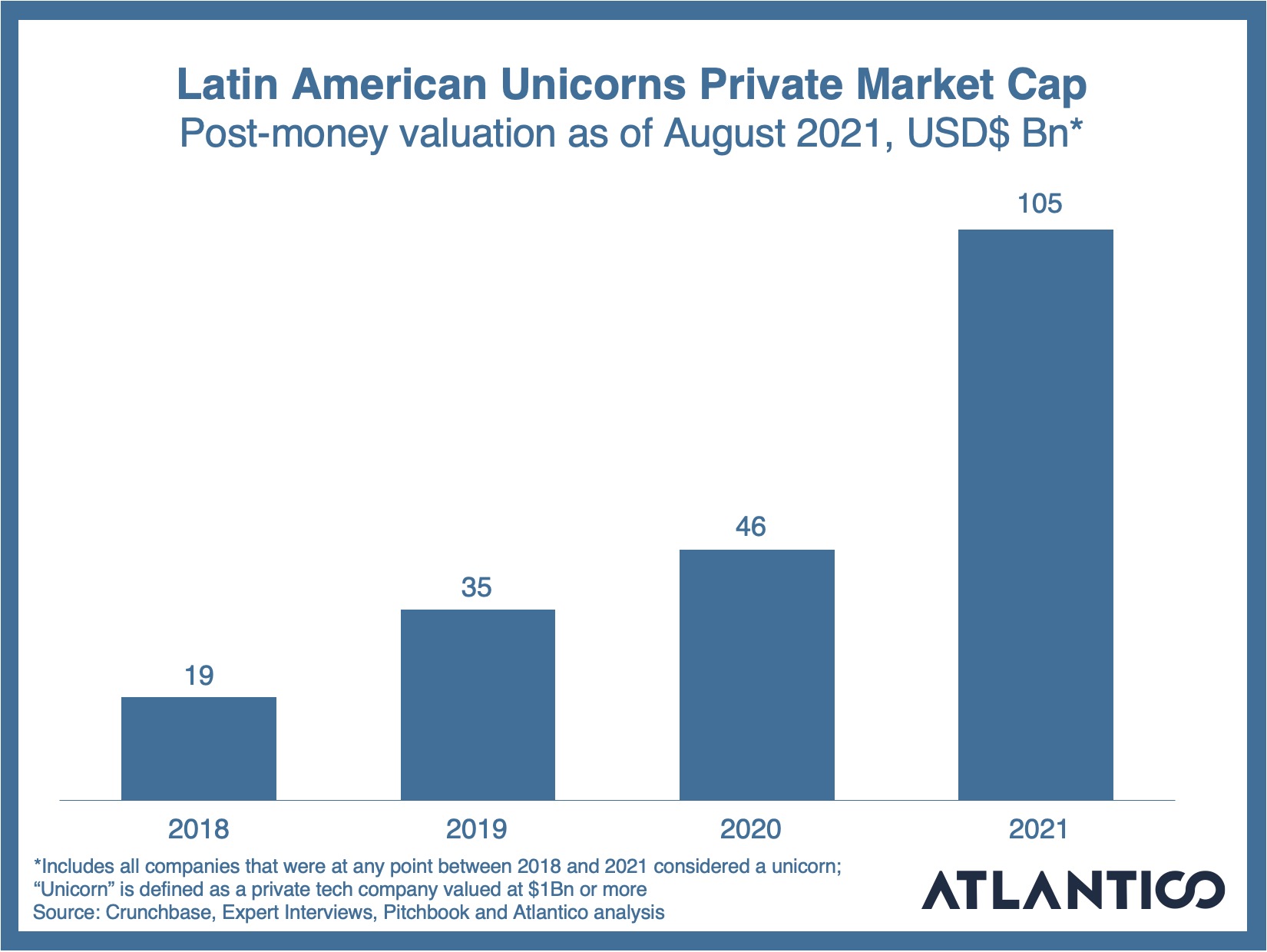 Much has been written about Latin American fintechs, which last year drew 40% of the region’s venture capital investment. The revolution witnessed over the last five years, which produced the likes of Nubank (the world’s largest digital bank), was sparked by a mix of changing consumer demands, a concentrated banking sector and a pro-innovation regulatory environment. We are now seeing the second-order effects of the fintech boom, as the same set of conditions arise in other soon-to-be disrupted sectors.

In the insurance space, similar changes are giving way to innovative models like 180o in Brazil and Betterfly in Chile. The former, founded by prior Nubankers, takes embedded insurance to the max, pioneering an insurance-as-a-service model that enables any company to create bespoke insurance products for its customers and seamlessly integrate them into their core experience. In the case of Betterfly, we see the rise of a novel benefits platform that lets companies offer a life insurance product that rewards healthy habits and charitable donations.