Inventor Jamie Siminoff was rejected by the sharks on ABC’s “Shark Tank” in 2013 when trying to make a deal for his video doorbell startup. This year, Amazon bought his company, Ring, for a billion dollars. Now, Amazon is looking for another way to tap into breakout products from the popular TV show – by becoming an official retailer partner for “Shark Tank.” The newly announced deal allows Amazon to showcase past and future “Shark Tank” products on its website, and come with a $15,000 Amazon Web Services (AWS) credit for each eligible “Shark Tank” entrepreneur.

The products will be available in a new Shark Tank Collection on Amazon Launchpad, its platform for hardware and physical goods startups, which first arrived in 2015. The idea is to offer a dedicated place on Amazon where consumers can shop products from up-and-coming companies, like Bluesmart’s luggage, eero’s Home Wi-Fi system, Casper mattresses, and hundreds more.

This new collection is not the first time Amazon has featured “Shark Tank” products on its site, however.

Also in 2015, Amazon launched a new online store called Amazon Exclusives, which featured a variety of new brands, including products from “Shark Tank,” like Tower Paddle Boards, for example. 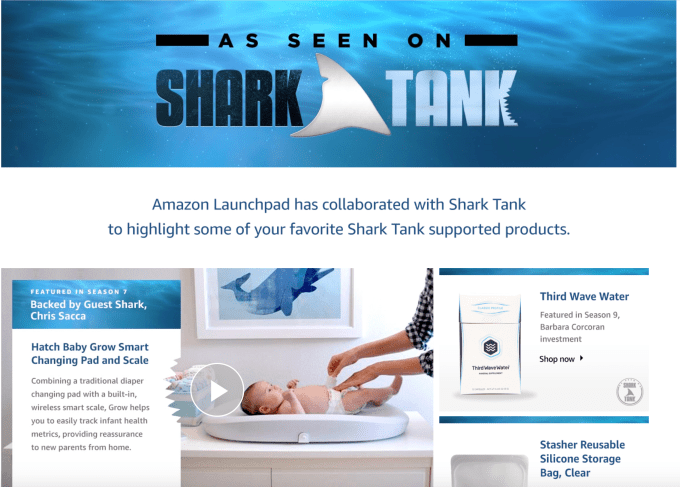 At the time, the “Shark Tank” merchandise selection was limited, though.

Amazon says the new collection features over 70 products that successfully received funding from “Shark Tank” seasons 1 through 9, and new products from season 10 and beyond will be featured here in the future.

The products available today include things like smart changing pad and scale Hatch Baby, coffee enhancer Third Wave Water, and storage bags from Stasher, among others. You can even sort and filter products by those that were funded by two or more sharks, or those with over $250,000 in funding.

“For the first time ever, ‘Shark Tank’ has a store on Amazon.com dedicated to helping our entrepreneurs scale their businesses and highlight top products from the show,” said “Shark Tank” investor, Barbara Corcoran, in a statement. “We are excited for the Amazon Launchpad Shark Tank Collection to bring products from our entrepreneurs to retail for customers and fans of the series.”

For Amazon, the deal isn’t just a way to redirect “Shark Tank”-related shopping searches to its site, following an airing of the TV show. It also gives Amazon a first-hand way of seeing which products are becoming viable consumer hits – something that could open the door for an acquisition or further deal-making at some later point, perhaps.

Of course, that would require the TV sharks to not be quite so short-sighted – after all, they thought Ring was overvalued, and passed. (They’re not interested in companies that require too much capital, apparently.) In hindsight, it still seems like a miss on their parts. And with the start of Season 10, the sharks again passed on a product Amazon could like – Boxlock, a smart lock for securing packages left at your doorstep. After all, not everyone will want to let delivery drivers into their home.

“The Amazon Launchpad program is all about empowering creators and inventors, enabling them to reach hundreds of millions of customers,” said Jim Adkins, Vice President, Amazon. “By teaming up with ‘Shark Tank,’ we are making it fun and easy for fans of the show to discover a wide variety of unique innovations and cutting-edge products,” he said.

Instacart raises another $600M at a $7.6B valuation